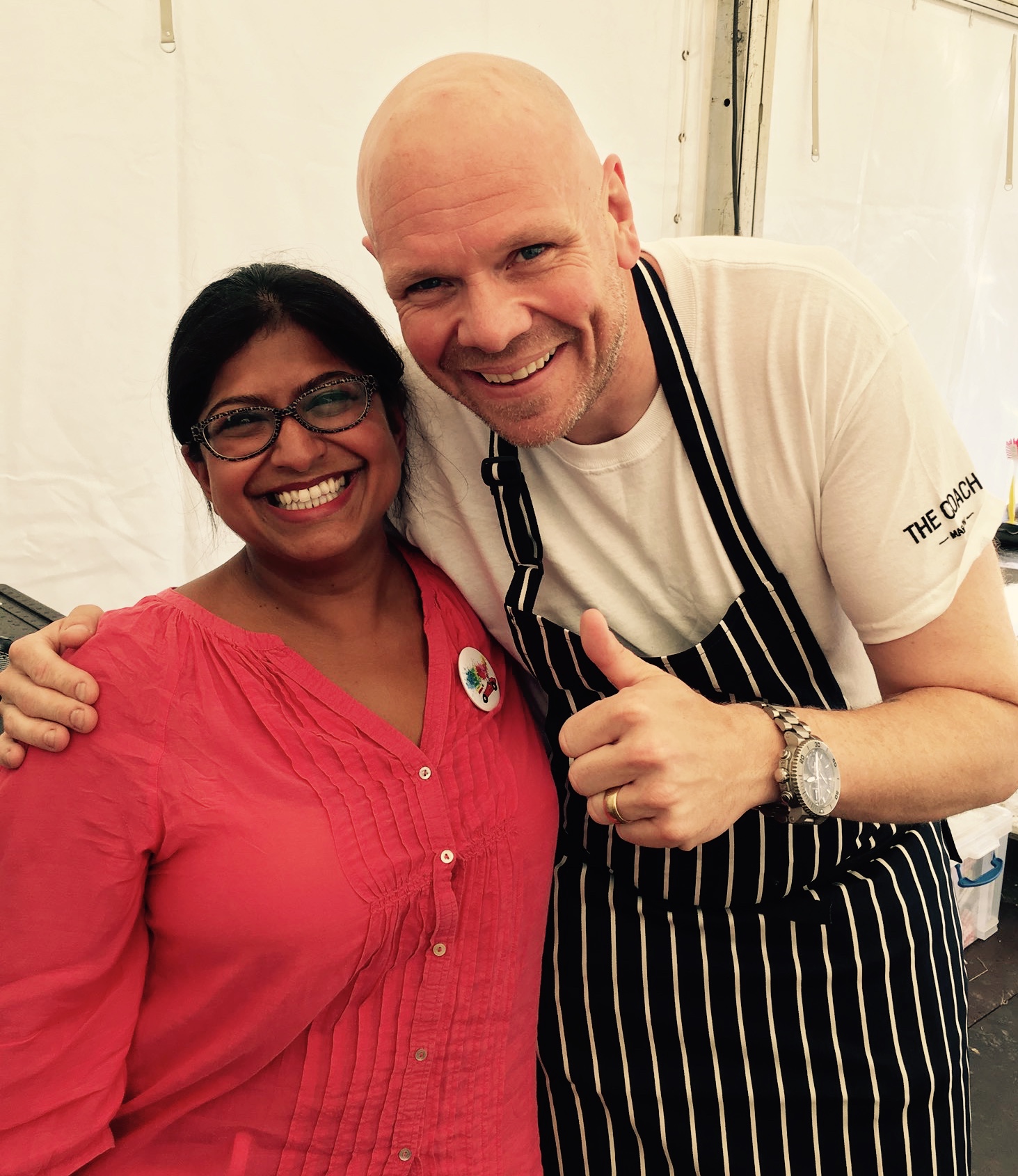 Is it possible to have too much fun whilst you’re working? I think the answer is very nearly after a packed weekend for the Hamiltons at CarFest South for Children in Need this bank holiday weekend. I confess I hadn’t heard about this festival before I was invited to take part, but I soon learned that it was quite a big deal. The brainchild of Chris Evans, CarFest is now in its fifth year. I was told that Chris gave up bread for Lent one year and to distract himself decided to create the best family-friendly festival in the UK. He obviously succeeded as CarFest now takes place over two locations (North and South) every year and is the second quickest selling festival in the UK after Glastonbury. The basic themes are cars (lots of fast, noisy cars), music, child-friendly entertainment and, for the first time this year, food.

My invitation to join a quite frankly stellar line-up, came from my work with the digital TV channel Simply Good Food TV, which is a free to download phone or tablet app full of existing and brand new food programming. Peter Sidwell, who is the driving force behind the app, invited me to join him on the bill for the brand new Food Fair Kitchen Live stage at CarFest South. The entire event is put on to raise money for Children in Need, so it was a very easy (and very quick) decision for me to make.

As well as Peter and myself the other chefs involved were the likes of superstar chefs and foodies Tom Kerridge, James Martin, Angela Hartnett, Olly Smith, and Great British Bake Off winner Jo Wheatley. We were also joined on stage by Rob Buckhaven, wine expert and TV presenter who looked after us all on stage to ensure we got through the demos without any hitches. I had a great time with the backstage crew and meeting Tom Kerridge and James Martin again was a pleasure as it always is. I honestly forget how short I am sometimes until I meet these guys and they all end up having to sort of crouch down to make sure they can get into the photos with me!

As you can imagine the crowds were massive; this is a huge event and the general atmosphere and vibe was incredibly uplifting and positive. There was so much to do and everyone is there to support a wonderful charity, and people seemed genuinely pleased to be there and just to be part of it. I even met up with some Bishop’s Stortford buddies who were there as well as making lots of new friends. The event took place on Laverstoke Park Farm in Hampshire, which is the vast organic and biodynamic farm belonging to former Formula 1 world champion Jody Sheckter. So the petrol-head theme ran through the entire event and some of the cars on display were really jaw-dropping; my childhood favourite the Lamborghini Countach the highlight for me. Chris Evans was a great host for the whole event, his energy and infectious enthusiasm truly remarkable.

The whole family went down for the festival and we all got right into the spirit of things with festival face-paint, Pudsey ears, wigs on #WigSunday (and Jim looked amazing as a head-banging platinum blonde I must say), a bit of a mosh in the mosh pit and dancing crazily in the middle of a field on my own to some top-notch music from the likes of Will Young, Rick Astley, Ronan Keating, The Feeling, Sophie Ellis-Bextor, Status Quo and the Stereophonics whilst enduring constant eye-rolling from my children!

On the work front, I was demo-ing South Indian spiced crab cakes with a pink grapefruit, fennel and chilli salad and served with a chilli grapefruit rum punch. The back stage crew certainly enjoyed it and I even sent a portion to Chris Evans to say thank you for hosting us so hospitably. I’m not sure if he actually ate them, but presumably somebody did and you can’t say I didn’t try!

So a genuinely wonderful weekend, one of the highlights of the year without a doubt. If I had to pick my favourite moment: it would have to be meeting Pudsey – sorry Tom, but he was the real superstar of the show for me!